This is one of the most widely diagnosed conditions by GPs and gastroenterologists affecting more than 20% of people in the UK overall, with twice as many women reporting symptoms as men. (1). If you suffer periodically from gastrointestinal discomfort, pain, bloating or abdominal distension then you may be suffering from IBS. 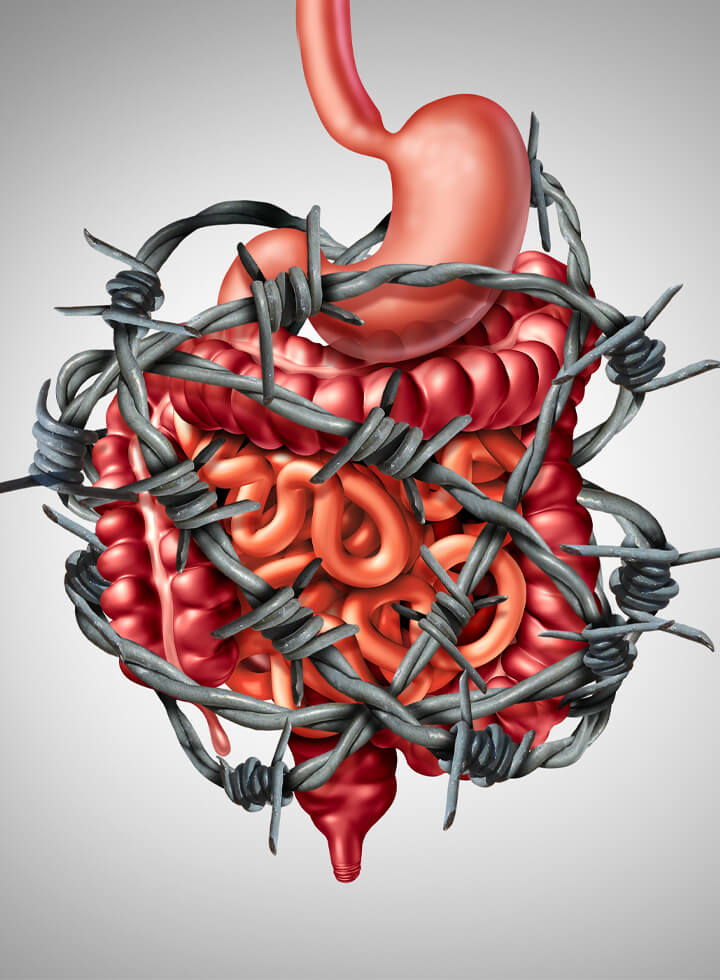 It is a condition affecting the small intestine and the colon. There are no changes in structure or appearance that are visible to your doctor, but there may be changes in digestive muscle movement, sensitivities to foods, gas or stools or other changes of function that cause the symptoms.

For diagnostic purposes, clinicians use criteria known as the ‘Rome IV’ criteria*. A diagnosis of IBS requires that patients have had recurrent abdominal pain on average for at least one day per week during the previous 3 months, that is also associated with two or more of the following(2):

An IBS diagnosis therefore is based mostly on the subjective experience of symptoms. It does not tell us what is most likely to be causing those symptoms or how we are going to address it.

Also because these symptoms are not only experienced by IBS sufferers, it is important that I work with your GP and other medical specialists to make sure that other conditions have not been overlooked.

* The Rome process and criteria is an international effort to collate information that may be helpful in the diagnosis and treatment of functional gut disorders. The Rome IV criteria for diagnosis of IBS was released in June 2016

So what are the symptoms associated with IBS?

IBS is called a ‘syndrome’ because it has a consistent association of multiple symptoms. These can include:

Everyone has a slightly different experience of IBS in terms of symptoms and frequency of ‘flare-ups ‘. However blood in the stools, fever or unintended weight loss are not normal and should be addressed to your doctor.

What are the causes of IBS?

The prevailing hypothesis is that IBS is a result of imbalanced brain-gut communication that can manifest in many ways and may include:

• Visceral hypersensitivity – this relates to how much sensation we feel from our gastrointestinal tract. In some with IBS, these sensations can register in the brain as pain.

• Changes in the motility of the gut – which relates to how long it takes for food, bacteria and toxins to be moved along and out of the stomach and small intestine. It is governed by the migrating motor complex (MMC) and takes place during the fasting period between meals. It is important because it may allow for the accumulation of gases or toxins that can cause pain.

• Bacterial overgrowth – this relates to having an increased number or abnormal types of bacteria particularly in the small intestine, termed SIBO. These displaced bacteria can often produce excess gas and may contribute to sensations of bloating. Studies show that people with IBS were 3-4 times more likely to have SIBO compared to people without IBS (3). It may be worth testing for SIBO . Read more about SIBO

• Post infection reactivity – a bout of food poisoning or travellers’ diarrhoea can lead to short term or medium term changes in gut function and sensitivity.

• Changes in sex hormones particularly in women – the incidence of IBS is significantly higher in women than men, with women who have IBS reporting changes in their symptoms that vary through their menstrual cycle. Women with IBS are more likely to report issues with constipation (than diarrhoea) and studies have shown that colonic transit time can vary depending on the phase of the menstrual cycle (4).

• Food allergies and sensitivities – Most people are aware of foods that are triggers for them and find that they are better avoided. However other foods may be causing localized inflammation in the gut and may be identified with functional testing.

• Stress and anxiety can trigger varying symptoms associated with IBS

How I can help?

A detailed clinical assessment that includes consideration of current symptoms as well as a detailed health history is the starting point for determining the nature of your IBS and the most likely contributory factors.

Functional testing will be recommended as necessary. This may include stool testing, food intolerance testing or breath testing if SIBO is suspected. Most tests can be done at home.

Regular follow up to help you in your recovery

In this call we will discuss your symptoms and brief health history and I will explain how I would approach working with you. You can decide whether I am the right person to work with you.